Scenes from the end of an Elizabethan age 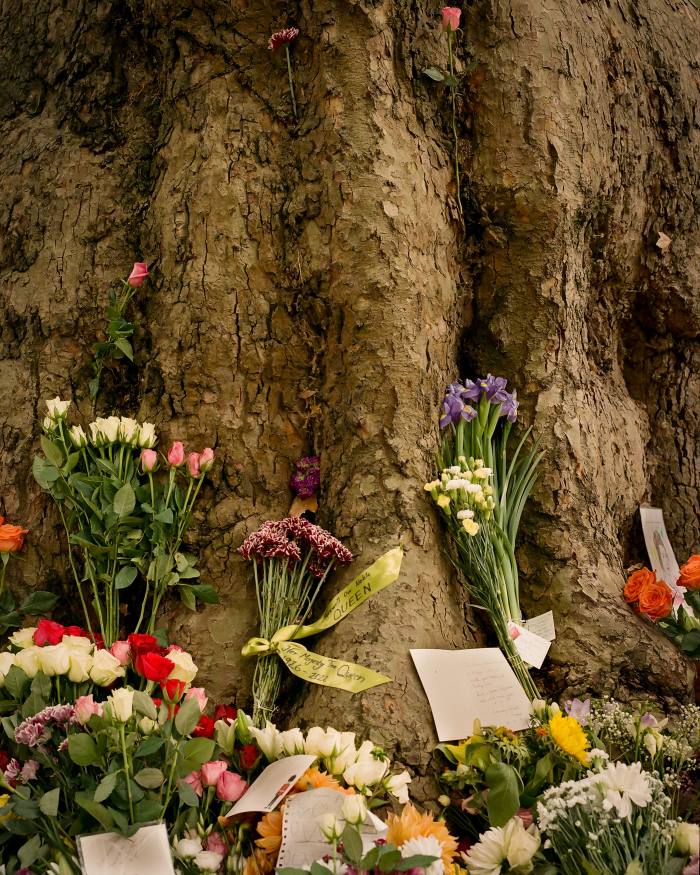 By the time I got down to Westminster after work on Friday September 9, the head of broccoli someone had wedged into the Buckingham Palace gates alongside the bouquets of flowers had been removed. There was plenty else to see, though.

After Queen Elizabeth II’s death was announced at 6.30pm on Thursday, people from all over the country made their way here in their thousands, despite the fact that the Queen herself remained in Scotland until the following Tuesday.

The narrow paths through Green Park, a 40-acre triangle of grass that borders the palace’s northern corner, were packed. I saw a man in a suit try to overtake the crowds by walking on the grass and promptly pratfall into some mud in a slip that was worthy of the Three Stooges.

The atmosphere over the weekend was odd. It was very busy, and somehow busier with each passing day. Even at close to midnight on Saturday, when I expected to find just the odd post-pub stragglers lurching around, the streets were heaving with people of all ages. Irritated cyclists complained in loud voices to themselves about their inability to use the roads.

There was construction work going on in preparation for the funeral next week, which meant that although there was a respectful quiet that belied the numbers of people, a decidedly un-funereal beeping from JCBs rang through the air.

Twenty-nine identical white marquees with bright studio lights had been set up for press at the edge of Green Park, giving it something of the flavour of an unusually linear crime scene.

The place was swarming with journalists. I asked a boy wearing a Union Jack beanie why he had come down, and he told me in a slightly weary voice that I was the third reporter to ask him. “It’s the hat man, I told you, it’s the hat,” his friend said, hitting him on the arm. He didn’t take it off.

The reason we have funerals is partly because it gives people a script for how they are supposed to interact with a death. The funeral on Monday will dictate how the Crown wants the public to feel about the Queen’s passing: that it is a sombre moment of great circumstance requiring an almost fantastical degree of ceremony.

But the public have jumped that gun and don’t seem to know quite what to do with themselves in the meantime. People had different reasons for being here. Lost-looking tour groups of teenage Europeans weaved around ­history rubberneckers, passers-by who had just come to get their fill of the news event, spinning around in slow, solemn circles with their phones held aloft.

I watched as one couple positioned themselves in front of the palace, took a handful of selfies with their faces set in stony frowns and then moved off again. I asked Adam, 24, why he was there. “I dunno. She seemed all right,” he said, shrugging.

To lay flowers at the palace gates themselves, you have to join a separate, barricaded queue. Not everyone is thrilled about the influx of cellophane-wrapped bouquets.

One crowd-control marshal I spoke to, whose name I didn’t get because halfway through our conversation he was called to intervene in a small fight that had broken out between another marshal and an irate commuter who tried to jump the barricades to make a train at Victoria station, implored me to tell people to stop. “Tell them to invest in a charity instead, we’re going to have to clear all these flowers at some point. We’ve got a cost of living crisis.”

A woman from Sheffield named Anthea overheard us and stopped to object. “Of course people are going to bring flowers. She can’t have fewer flowers than Diana, can she?”

For some people, being here felt less like a matter of choice than of duty. A group of older women were leaning on the barricades and watching as one black, star-shaped balloon batted mournfully at the gates.

“We’d do anything to be here today,” said Diane, who met the Queen when she received an MBE for services to music education. Graham Fuller, who had brought his whole family along, felt he ought to be here because he “served the Queen” as a police officer for 30 years.

Kenny, a 77-year-old from Scotland, came down wearing a wooden placard around his neck saying “King Jesus is coming, repent” and a Britney Spears-style mic coiled around his head. He feels concerned about King Charles’s coming, too. “He has to come to God for help for reigning in this country, because big trouble is coming like never before in history. We’re headed to the greatest depression in history.”

On Saturday, Green Park felt less like a site of pilgrimage than a music festival. The station was closed due to overcrowding, and queues to get at the palace gates themselves were rumoured to stretch up to four hours. Girls snaked through the crowds in single file, holding each other’s hands, and the grass was trampled to mulch.

By Sunday, you couldn’t get anywhere near the palace without committing to half-a-day’s shuffling in the throng. Disappointed people put their flowers around random trees in Green Park instead. One scrawled letter accompanying a bouquet read “What is your favourite animal, King Charles?”

This is a self-selecting crowd. I heard very little anti-royal sentiment, and what I did hear was said in hushed tones and not for publication in the newspaper alongside their names. Older people said things I expected to hear, that they felt like she was a member of the family, that they had spent their whole lives with her and wanted to pay their respects.

The views of young people surprised me more. My fifth birthday party took place the day after Diana died. It was apparently a subdued affair for the adults present, but I ate my chicken nuggets happily, none the wiser.

Britons who are under 25 today, though, were born after the princess’s death. They have never seen the spectacle associated with a beloved royal’s death. “It’s always a sad day when it’s the end of a matriarch,” a 23-year-old called Monica told me. “That’s what I’ve been most sad about, that we have to now say: ‘Long live the King.’”

Lily, 15, and Rosie, 18, were milling around a hundred metres or so from the palace on Saturday afternoon, drinking cans of Strongbow Dark Fruit. “Yeah, we love the Queen,” Rosie said. “I think Charles is quite good though, because he’s very into the environment. I feel like the Queen didn’t pursue that as much.”

In general, reactions to Charles were muted. It’s difficult to imagine what emotions will be recorded in this same spot in however many years hence, when people gather to witness the end of his reign. Apart from anything else, he won’t have as long as the Queen had to cement himself in the public imagination. “He hasn’t got 70 years in him, has he?” as one person put it.

Two 17-year-olds, Charlotte and Hannah, were up from Croydon after a birthday party on Saturday night. “Don’t say Croydon,” Hannah instructed me, “say Surrey, it sounds nicer.” “Now we’re going to have a lot of kings, so, especially as young women, I think she was really empowering,” Charlotte said. “Girl power, isn’t it,” Hannah added.

Imogen West-Knights is a writer and journalist based in London. These photographs were made last weekend by Benjamin McMahon and Alice Zoo