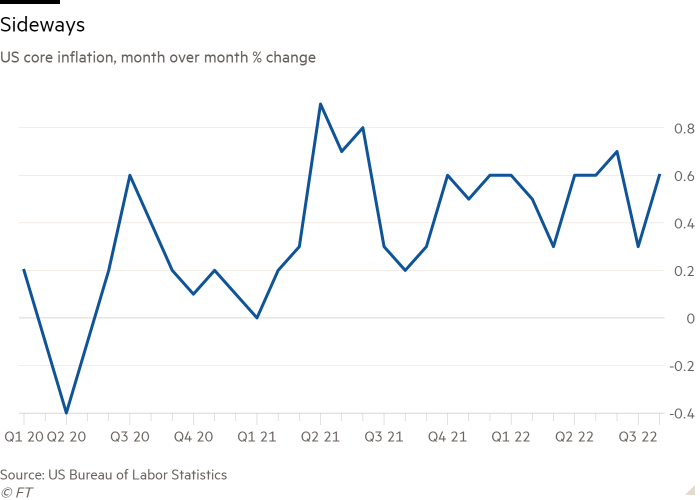 This article is an on-site version of our Unhedged newsletter. Sign up here to get the newsletter sent straight to your inbox every weekday

Good morning. Sometimes markets move because they learn something new. Other times, they move because they are forced to see what was always right in front of them. I think yesterday was the latter kind of day. Disagree? Email me: [email protected]

An unpleasant encounter with reality

The market had expected — “hoped” may be a better word — that the benign CPI inflation reading for July would be followed by a still more benign one for August. As we all know now, this did not happen. At all. The result is that a chart of month-over-month change in core CPI now shows no appreciable downtrend over the past year. Inflation is certainly not rising. But it sure doesn’t look like it’s falling, either:

The market responded yesterday by resetting its expectations for Federal Reserve policy and slashing risk asset prices. The “terminal,” or estimated peak Fed policy rate, expected to arrive early next year, rose 28 basis points, to 4.31 per cent. As of Monday, the futures market had been pricing in no chance of a 100 basis point rate increase when the central bank meets next week. By Tuesday evening it reckoned the chances at one in three. The short end of the yield curve leapt, deepening the inversion of 2- and 10-year interest rates. Stocks got throttled. The Nasdaq lost more than 5 per cent. Every sector was down big.

An overreaction? In a sense, yes: there was nothing in the August report that should have fundamentally changed the balance of risks facing the market. Before the report, there were sound reasons to think inflation will abate before long. They remain sound. But the market had been too optimistic about what the path to lower inflation would look like, and had blithely discounted stern statements of intent from the Fed. Tuesday’s rout looks less like the absorption of new information than a loss of naivety.

Whatever happens to inflation in the next year or two, a lot of volatility in the price indices is a certainty. Repeating what Unhedged has written before, there is no such thing as high and stable inflation. Even if inflation declines from here, the decline will not be smooth. Here is a chart of core CPI in the last big inflationary episode, at the dawn of the 1980s. It was characterised by nauseating month-to-month swings:

This time around, the August numbers won’t be the last surprise. At the same time, though, we know core CPI is something of a lagging indicator. It is clear, as Unhedged wrote yesterday, that housing inflation has all but abated. Indeed housing deflation is threatening. But it will be next year, in all likelihood, before this shift shows up in the CPI numbers. For August, shelter inflation was up .07 per cent from July, a new high for this cycle. And shelter has a 33 per cent weighting in the index.

Disinflationary flags are waving outside of housing, too. “We can see disinflation everywhere except in the official CPI statistics,” Paul Ashworth of Capital Economics wrote to clients on Tuesday. When I asked for specifics, he noted that “travel services prices — airfares — are coming down. The dollar is soaring, shipping rates are collapsing. The normalisation of supplier delivery indices suggests shortages are easing, retailers are complaining about being stuck with too much inventory. Used vehicle auction prices are dropping back.”

The problem — both before Tuesday’s bad numbers, and after them — is wages, which are increasing at about 6 per cent or more (depending on your measure) against the backdrop of a persistently tight labour market. The fact that services inflation (excluding shelter services) remained elevated in August is a nasty reminder of this fact. As long as wages are running hot the possibility of a wage-price spiral cannot be ruled out, and the Fed cannot back off.

Reducing inflation is likely to require a sustained period of below-trend growth. Moreover, there will very likely be some softening of labour market conditions . . . estimates of longer-run neutral are not a place to stop or pause . . . The historical record cautions strongly against prematurely loosening policy . . . Our monetary policy deliberations and decisions build on what we have learned about inflation dynamics both from the high and volatile inflation of the 1970s and 1980s . . . longer-term inflation expectations appear to remain well anchored . . . But that is not grounds for complacency, with inflation having run well above our goal for some time . . . The longer the current bout of high inflation continues, the greater the chance that expectations of higher inflation will become entrenched . . . we must keep at it until the job is done

One CPI report, benign or malign, was never going to sway the Fed. Whether they keep plugging at 75 or push to 100, the central bank knows it has a long way to go. Until wages and the prices that track wages are way down, they are not going to pivot. Why would they?

In case you missed it yesterday, the FT’s “debt monsters” compendium of hyper-leveraged corporates facing scepticism from bond markets is a rich menu of binary bets — companies that will either be broken by a downturn or catapult out of it.

Recommended newsletters for you

Cryptofinance — Scott Chipolina filters out the noise of the global cryptocurrency industry. Sign up here

Swamp Notes — Expert insight on the intersection of money and power in US politics. Sign up here