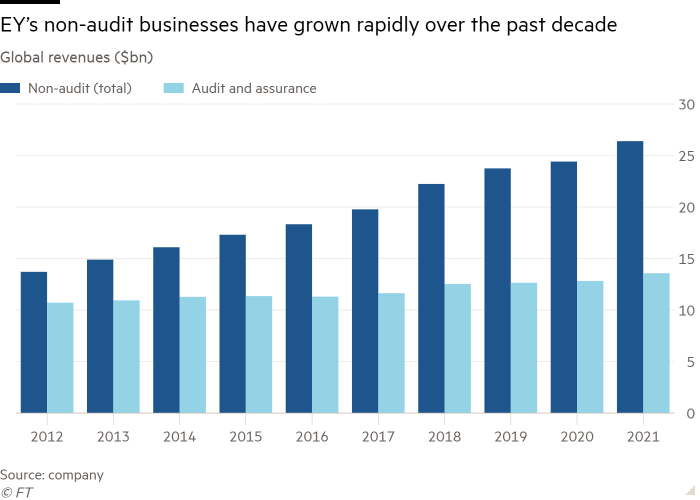 A year since EY’s global chief executive Carmine Di Sibio began plotting a potential break-up of the Big Four firm, its 13,000 partners will finally get to have their say on the plan.

Partners will begin voting in November on whether to split EY’s advisory and audit arms, a bold gamble that the businesses can forge a brighter future on their own but one also laden with risks.

The blueprint for the break-up was signed off by the group’s top bosses last week after a fraught summer in which EY’s member firms duelled over the possible structure of a split and battled to minimise potential mammoth tax liabilities from a deal designed to free the businesses from restrictions created by conflicts of interest.

But selling the deal to partners and keeping more than 300,000 employees happy will be just as difficult as winning the backing of the firm’s leaders proved, industry veterans say.

The demerger “is the most complex transaction ever undertaken in the world of professional service firms”, said Paul Raleigh, former global head of advisory at Grant Thornton.

Reaching the point at which it can even be put to partners involved tackling thorny obstacles, including eliminating a potential $13bn tax liability that EY initially believed would be triggered by the split but has been seen off by additional work, according to people familiar with the matter.

The possibility of an alternative restructuring plan was also discussed among EY’s global executive team and bosses of some of its largest member firms after EY’s US leaders initially resisted signing off on the deal over the summer, said people with knowledge of the talks.

The plan agreed by EY’s bosses last week would result in the audit business remaining in a partnership structure while most other service lines, including consulting, deal advisory, managed services and the majority of the tax operations would be spun out and publicly listed, almost certainly in New York.

The transaction has thrown up a series of challenges for the 2,000 internal and external executives and advisers working on it.

The difficulty of managing the split across the roughly 150 countries where EY operates means only the biggest 70 to 75 member firms will be included in the split, according to people with knowledge of the plan.

Consultants and auditors in the smaller firms, accounting for just a fraction of total global revenues, will remain in their existing national partnerships and will be tied to the audit-dominated business globally.

As well as the technical complexity, Di Sibio is having to manage competing interests within EY. Like its Big Four rivals — Deloitte, KPMG and PwC — EY is made up of a network of national member firms in about 150 countries.

“Unlike the parent company in a corporate group that can mandate its subsidiaries to do as it desires, EY [Global] cannot order the member firms to do what it wants,” said Raleigh.

Getting “hundreds of leaders on board . . . took a few months longer than we anticipated”, Di Sibio admitted this week.

Forging a consensus became so taxing over the summer that EY global executives and bosses of several national member firms explored whether they could press ahead with a break-up even if EY US, its largest member firm, refused to back the split, according to three people close to the talks.

Engineering a separation without the backing of EY US, responsible for about 40 per cent of the group’s $45bn in annual revenues, was unthinkable to many.

But as leaders at the US firm delayed signing off because of concern over how the break-up would address billions of dollars of unfunded pension liabilities, the prospect of an alternative restructuring loomed into view.

According to two people familiar with the talks, the fact that other member firms were prepared to examine a different structure helped focus the minds of EY’s US leaders because it made clear the strength of appetite for some form of sweeping change.

European member firms, which have faced more pressure to change their structure after a series of audit scandals at the Big Four, felt more urgency to devise a radical overhaul, said another person with knowledge of the talks.

While US regulators are looking at potential conflicts of interest arising from the Big Four auditing companies that their consulting arms have also advised, the idea of breaking them up has not featured on the political agenda in the way it has in Europe.

“If you look at the last 10 years, there have not been any highly publicised failures in the US,” said Jeffrey Johanns, a former PwC partner who teaches auditing at the University of Texas at Austin. “They have occurred in China, in the UK and in Germany with Wirecard.”

The threat of change

As EY’s leaders now seek to sell the split, they will need to convince both audit and consulting partners that it makes sense to rip up a structure that has just helped deliver a record $45bn in annual revenues.

“Normally you drive change when you’re in the shit, and we’re not,” said one person with knowledge of the plans, adding that part of the challenge is that “people don’t like change”.

Audit partners are being asked to accept cash windfall payments of two to four times their annual earnings in return for the likelihood of becoming the only large audit firm with limited consulting expertise. The audit-focused firm would have about 6,200 partners and 120,000 staff globally, according to figures presented to partners on Thursday.

At the same time, consulting partners will get shares in the new advisory business and take a hefty cut to their annual pay, which will be more severe for more senior partners. Whether they ultimately benefit financially from a split will depend on how shares in the business have performed by the time they are allowed to sell down their stakes in five years.

Under the plan, the standalone audit business will retain some tax and advisory capabilities, which will initially generate about one-third of its revenues. 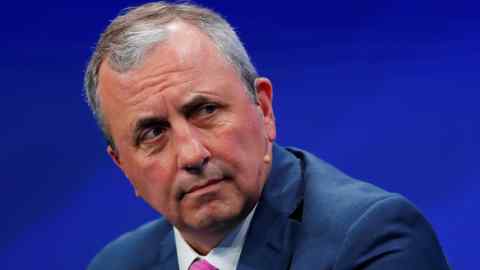 The aim is to quickly grow the advisory capacity of the audit business, a strategy that carries echoes of EY’s rebuilding of its consulting business after the $11bn sale of its IT consulting unit to French group Capgemini in 2000.

But EY is betting that the advisory business it intends to spin off will fare better than the one it sold to Capgemini, which struggled to integrate the unit.

Unlike the Capgemini disposal, the current separation plans are not a trade sale, avoiding the risk of culture clash if the consulting business were sold to another organisation, said Di Sibio.

The 59-year-old insisted his plan also differed from other troubled spin-offs, such as KPMG’s flotation in 2001 of its consulting business BearingPoint, which ended in bankruptcy in 2009. “Our size and scale is very different than BearingPoint,” said Di Sibio.

The mathematics of a split also threatens to pit generations of EY employees against each other or push senior staff below partner level to consider their options.

“You might be thinking ‘I am two years away from partner’ or ‘I am on the partner track’ but that track looks different now,” said Kevin McCarty, chief executive of West Monroe, a 2,200-person consulting firm headquartered in Chicago. He said some non-partner employees would be unhappy with the plan.

EY’s plan to recruit 740 external partners in the next 15 months will do little to reassure consultants who fear their career path will be less attractive when the advisory business is listed. A person briefed on the matter said the figure was not significantly higher than the number of partners hired externally last year.

Di Sibio argues that the aggressive growth targets of the newly separated businesses will create unparalleled opportunities for promotions.

But even if EY comes close to delivering its ambitious revenue targets — 21.5 per cent annual growth in advisory for three years and 7 to 8 per cent in the audit-dominated business — Raleigh suggested doubts might remain on both sides about whether a better deal could have been done.

“As in most divorce settlements there is usually some lingering resentment that your former partner did better than you did,” he said.