A powerful typhoon tore through south-western Japan, bringing violent winds and torrential rain that left at least one dead, dozens injured and more than 300,000 households without power.

After making landfall near the city of Kagoshima in the southern island of Kyushu on Sunday, Typhoon Nanmadol headed north-east as authorities issued warnings of floods and landslides.

As of early Monday afternoon, the typhoon was passing through Shimane prefecture, packing sustained winds of 100mph. While the government’s highest level of warning in Kyushu was lifted, officials at the Japan Meteorological Agency urged affected regions to remain on alert and evacuate as needed.

“There is a risk of heavy rain and violent winds on Tuesday in western and eastern Japan. We must continue to be highly vigilant,” an agency official said. The agency predicted that up to 400mm of rain could fall in the Tokai area, south-west of Tokyo, by Tuesday morning.

According to state broadcaster NHK, nearly 70 people have been injured in the storm. One person in his 60s was found dead in his car in Miyazaki on the eastern side of Kyushu, according to a local official, after one part of the prefecture was deluged with nearly 1m of rain. 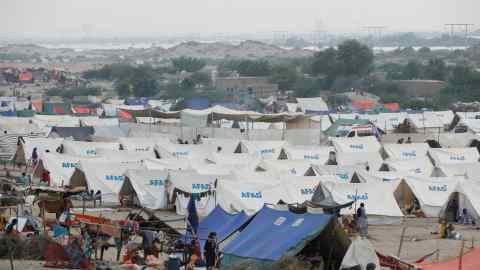 Prime Minister Fumio Kishida delayed his Monday flight to New York to attend the UN General Assembly by a day as government officials held meetings to assess the damage from the typhoon.

Ahead of the storm’s landfall on Sunday, residents of Kagoshima and the surrounding prefecture were warned to seek shelter in the sturdiest buildings and, if possible, to take refuge on higher floors.

The evacuation warnings for millions of people issues by local authorities are non-mandatory — a status that, in the past, has meant large numbers of people remained in their homes beyond the point when they could easily move to a shelter.

Japanese media reports said tens of thousands of people had relocated to evacuation centres as electricity was cut, while mobile phone networks battled to remain operational.

The expected trajectory mapped by the meteorological society showed the typhoon heading toward the south-western region of Japan’s main island of Honshu on Monday and continuing north-east on Tuesday.

Tokyo, Japan’s capital, was not near the centre of the typhoon’s expected path.